Letícia Custódio was born in Barretos, São Paulo state, Brazil, on March 23, 1988. She is the oldest daughter of Jaime José Custódio e Sueli Aparecida Ferreira Custódio. Her sister is an Engineer undergraduate student. Letícia spent her childhood and youth in Barretos where all her family lives.

She arrived at Range Cattle REC, Ona, Florida in August 2010 as an intern. Letícia will receive her Animal Science degree in January of 2011. 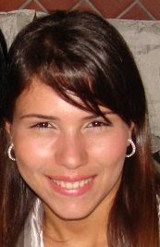