Nayara Alencar completed her bachelor of Animal Science degree at the Federal University of Tocantins, Araguaina, Brazil, in 2012. She finished her master’s degree in February 2014, at the same university, with Dr. Antonio Clementino dos Santos. Her thesis was with grasses of the genus Urochloa established intercropped with annual crops in the northern Tocantins. In March 2014, she began her Ph.D. studies with Dr. Joao Vendramini in tropical animal science at the Federal University of Tocantins.

In June of 2016 she began a 9 month program at the UF/IFAS Range Cattle REC as an exchange visitor, research scholar focusing on evaluating establishment and consortium of pintoi peanut in tropical grassland pastures. 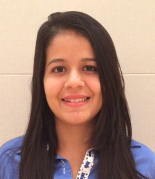