THE FLORIDA CATTLEMAN AND LIVESTOCK JOURNAL

For questions or comments regarding this publication contact: John Arthington 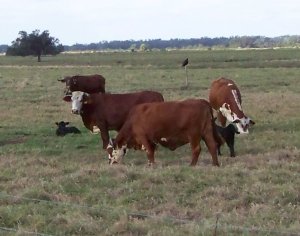 Most of our state's grazing land is currently moderate to excessively dry. Drought stressed forages and reduced forage dry matter accumulation has been reported across the entire state even in areas that have received rainfall relief in the past couple months. As we look toward the coming winter and early spring, many beef cattle producers are asking, "Will it be a tough one"?

Tough winters are not foreign to Florida's beef cattle producers. In general, our state's cowherd calves in the late fall through winter, a time when our available perennial pastures are lacking and our cowherd's nutritional needs are the greatest. During average winters, or even good winters, we have moderate to mild winter temperatures with a few much-needed rain showers to coax the growth of winter annuals in central and northern Florida and Hemarthria limpograss in southern Florida. In contrast, tough winters are characterized by excessively cold and dry conditions often lasting late into the spring. As an example, our Research and Education Center in Ona has a 60-year running average of about 3 episodes annually that the air temperature reaches 32 degrees (F) or lower. In the winter of 1999 to 2000 we experienced 15 episodes of air temperatures falling below the freezing point. This was a tough winter, which was associated with prolonged cold events and dryer than normal conditions. Cattlemen throughout the state scrambled to identify management systems to maintain the cowherd until the coming summer season.

It is impossible to know exactly how this upcoming winter will turn out or when spring rains will bring back adequate grazing conditions. Predictions call for dryer than normal conditions throughout the state. The current status of our grazing lands, coupled with the overall lack of stored forages in the southeastern US, suggest that we would be wise to plan for a tough winter. In this Ona Report, several suggestions for dealing with a tough winter are provided. As you review these options, attempt to identify those that might make your operation more productive and/or more profitable in the face of a potentially tough upcoming winter.

Supplementation of the cowherd is a common annual practice to provide cows and heifers with additional nutrients that may be lacking through inadequate forage quality or quantity. Managing supplementation varies annually and changes should be closely aligned to the body condition of the cows and status of available forage resources. The two most important nutrients targeted in winter supplementation strategies include protein and energy (energy is typically referred to as TDN). There are multiple choices available when purchasing winter supplements. Some important considerations to keep in mind when making this decision include:

When the entire cowherd is managed through the winter as a single group, there are always individuals that receive more nutrients than required and also those that receive fewer nutrients than required. One of the easiest and most effective methods of increasing the efficiency of the winter supplementation program is by separating the cowherd into individual groups based on nutritional need. At a minimum, three groups should be created, including; 1) growing yearling replacement heifers, 2) cows nursing their first and second calf, and 3) mature cows. If possible, a fourth group can be created consisting of two groups of mature cows separated based on body condition score and age. Once these cow groups are created the producer can focus their management resources (both pasture and winter supplement) on the groups that need it the most. This is a very effective procedure for individually directing resources toward distinct cow groups that have been organized to provide the greatest return on investment.

One of the most effective decisions for managing cows through a tough winter is early weaning of calves. Calves can be successfully weaned from their cow at any time after 70 days of age. The removal of the calf creates a physiological response in the cow that initiates cyclicity even when the cow is in less than optimal body condition. In addition, once lactation ceases the cow's voluntary forage intake will reduce by about 25% allowing forage resources to extend further during times of limited availability. Once early weaned, there are several options for managing the calf, including; 1) sell at the time of early-weaning, 2) graze on dormant perennial pasture with free-choice access to a complete grain-based mixture containing 18 to 20% crude protein, or 3) graze on winter ryegrass with supplement (16 to 18% crude protein) provided at approximately 1% of body weight. Many Florida producers have begun using early weaning management systems in their cowherds, especially young cows, with considerable success.

Try to avoid fertilizing bahiagrass, bermudagrass, and stargrass pastures in the winter months. It is always best to save this investment for an early spring (February / March) application when the grass is entering its summer growing phase and when spring and early summer grazing is most needed. In contrast, fertilization of winter annual pastures and winter Hemarthria limpograss pastures may provide critical winter grazing if fortunate to receive at least some rainfall near the time of application.

Save on Mineral Supplements

Tough winters may also be an opportunity to cull down the cowherd. Culling consideration should include eye and mobility problems. Opportunities to sell cows that have advanced eye lesions or mobility impairment are now greatly limited resulting in a condemned carcass. Producers should establish a management system to identify these cows early so that they can be culled and marketed with little loss in salvage value. Culling cows that wean small calves is another consideration. In a University of Arkansas study, 4,379 records were examined over two consecutive years from 18 cow/calf herds. Their results show that cows that produce calves in the lightest 1/3 of the total calf crop in one year are likely to continue to produce the lightest calves in subsequent years.

It is probably wise to begin planning for a tough 2008 winter and spring season. The purchase of harvested and stored winter forages will be greatly limited. Considering some of the options provided in this article will help producers to manage their cowherd through a difficult season with hopefully little reductions in performance. Additional educational articles related to winter supplementation, early weaning, fertilization, and mineral nutrition can be found at Solutions for Your Life EDIS at the University of Florida.