THE FLORIDA CATTLEMAN AND LIVESTOCK JOURNAL

For questions or comments regarding this publication contact: Dr. Joao Vendramini, University of Florida, IFAS 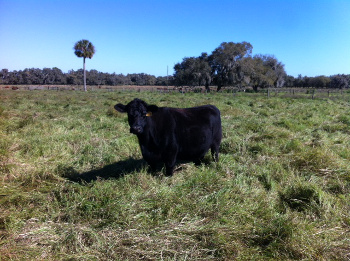 In Florida, stockpiling forage in the autumn for subsequent grazing in the winter has been a feasible management practice to reduce the need for supplemental feed. In addition, for many large commercial beef cattle operations in the state, stockpiling may be the only practical and/or economical method of forage conservation for the winter. The success of stockpiling forage in the autumn is highly dependent on climatic conditions; however, there are several management practice strategies that can potentially increase forage production and nutritive value.

The choice of forage species is one of the most important decisions. In South Florida, limpograss has been identified as the most suitable forage for autumn stockpiling because it produces greater herbage mass and has greater digestibility than other warm-season grasses at late maturity during the fall-winter. Although limpograss usually has greater digestibility than the majority of warm-season grasses, crude protein concentration decreases significantly at late maturity and supplementation is necessary to meet most beef cattle categories requirements. Recently, two new cultivars of limpograss, Gibtuck and Kenhy, were released by the University of Florida and tested for their stockpiling potential. Research conducted in Gainesville demonstrated that Gibtuck and Kenhy had greater herbage accumulation and digestibility than Floralta when stockpiled for 8, 12, or 16 weeks. In addition, a grazing study conducted at Ona showed that Gibtuck had greater herbage accumulation and digestibility than Floralta when stockpiled for 10 weeks and grazed by beef cows at the stocking rate of 1.6 cows/acre from January to March.

In some regions of Florida where limpograss is not well adapted, bahiagrass and bermudagrass may be alternative options for stockpiling. These species may have a slower growth in the autumn and faster decline in nutritive value at late maturity than limpograss; therefore, the process of stockpiling this species needs to be initiated early in the season (late summer). In addition, supplementation during the winter will be required to counter balance the decrease in nutritive value. It is not recommended to stockpile Jiggs bermudagrass in South Florida because it has been observed that Jiggs may have a high incidence of diseases and spittlebugs at late maturities with high herbage mass. Similarly, stockpiling stargrass should also be avoided because this species decrease forage quality drastically at late maturity.

The success of the stockpiling forage is highly dependent on favorable rainfall during the autumn to promote desirable forage growth. In general, forage is stockpiled in mid-September or early-October in South Florida and late-August or early-September in North Florida. Because of the relatively colder temperatures and early freezing events in North Florida, it is recommended to exclude the pastures from grazing earlier in the growing season to allow adequate period for forage accumulation. A determinant factor of production and nutritive value of stockpiled pastures is the occurrence of freezing events. Research conducted at Ona, FL indicated that the digestibility of warm-season grasses can decline by as much as 15% four weeks after a freeze event. Tifton 85 and stargrass were the species with the greatest decline in digestibility with a reduction of 19% in response to freezing temperatures. Research conducted in Gainesville, FL evaluated yield and nutritive value of limpograss stockpiled for 8, 12, and 16 weeks. Herbage mass increased from 4,700 to 6,600 lb DM/acre while crude protein concentrations decreased from 4.4% to 3.2% when increasing stockpiling periods from 8 to 16 weeks. In South Florida, limpograss pasture stockpiled in South Florida from early-October to December generally produce about 4,000 lb DM/acre and can be grazed for about 3 months at a stocking rate of 1.3 cow-calf pair/acre. 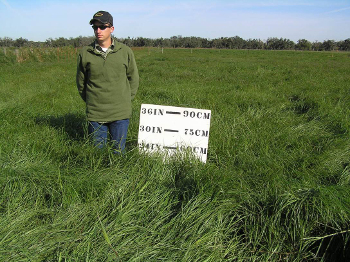 Pastures should be grazed or mechanically harvested before the stockpiling period to promote new regrowth and better nutritive value. After exclusion from grazing, pastures should be fertilized with 50 to 100 lb N/acre. Soil pH should also be corrected and phosphorus and potassium fertilization should be based on soil testing recommendations. Fertilization is effective to improve herbage accumulation; however, it typically has little effect on nutritive value of stockpiled pastures. As mentioned previously, supplementation is usually necessary to maintain body condition score of cows grazing stockpiled limpograss during the winter; however, since stockpiled forage will be the predominant source of feed to the cows, temporal variability associated with forage mass and nutritive value can also affect animal performance. A study was conducted at Ona in 2011 and 2012 to evaluate the performance of cow-calf pairs grazing stockpiled limpograss pastures and receiving 5 lb of blackstrap molasses and 2 lb of cottonseed meal. The cows increased body condition score from 4.4 to 4.9 in 2011; however, the forage had decreased in digestibility in 2012 and cows were only able to maintain the initial body condition score (4.4).

Pastures often change morphology and nutritive value during the grazing period after stockpiling, thus adjusting the supplement composition and quantity may be a feasible management practice to decrease the cost of supplementation. Limpograss pastures were stockpiled at Ona, FL from October to December 2013 and grazed from January to March 2014. Pasture height and nutritive value were measured every 14 days. Pastures were above 20 inches height with 56% digestibility at the start of the grazing season in January; however, there was a decline in height to approximately 17 inches and digestibility to 43% in February. In this context, different supplement strategies could be used to meet the requirements and maintain the cows at the target body condition score, 5.

In summary, what forage species should be stockpiled? Any warm-season forage can be stockpiled; however, limpograss is one of the most suitable species. When should stockpiling forage occur? The stockpiling process is highly dependent on climatic conditions and should start as early in the season as needed to accumulate sufficient forage mass for the winter. Shorter stockpiling periods may result in forage with better nutritive value but with less herbage mass. Lastly, what is the best approach to stockpile and use these pastures? Stockpiled pasture should be excluded form grazing and fertilized to increase the amount of accumulated forage. In South Florida, limpograss stockpiled pastures are grazed with approximately 1.3 cow-calf pairs/acre from January to March. In addition, supplementation should be adjusted according to the forage quantity and quality.

If you have any questions about this article, please contact Joe Vendramini at jv@ufl.edu or 863-735-1314.